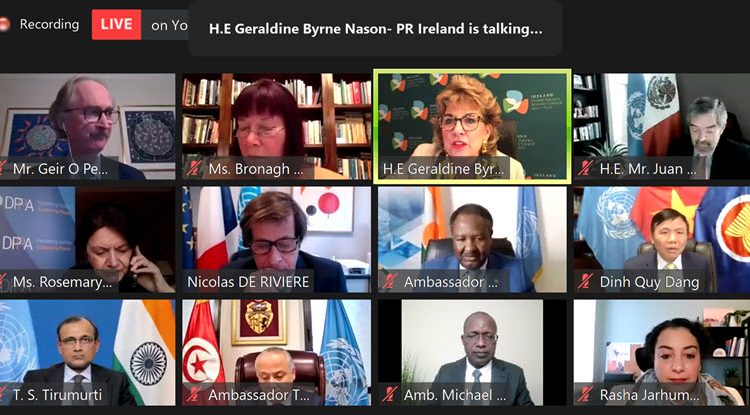 I begin today’s remarks by wishing a happy International Women’s Day to all the women on this virtual meeting. While this day is a celebration, it is a day to take stock about how far we have come but also a stark reminder of the damaging inequality which shape women’s participation in decision-making, including peace processes, twenty (20) years after resolution 1325.

For a country like mine, nested in a region with multiple crises, the Women, Peace and Security (WPS) agenda is not simply a concept, it is fundamental to sustaining peace and preventing conflict. Niger firmly supports this agenda.

We have continuously made commitments and strengthened the normative framework, it is time to act in a decisive way to ensure women’s full, equal and meaningful participation in decision-making and all peace processes.

As today’s discussion aptly highlights, the UN can lead by example. For the first time in history, there are as many women as men in top UN jobs, an achievement that shows the Secretary General’s commitment to gender equality. What this also conveys is that ensuring women’s full, equal and meaningful participation in peace processes can be achieved with political commitment.

In UN-led peace processes, women remain direly unrepresented. As the latest report of the Secretary General on WPS pointed out, between 1992 and 2019, women constituted only 13 per cent of negotiators and 6 per cent of mediators in peace processes. Despite the critical role that  women’s organizations and women human rights defenders play in consolidating peace and in post conflict reconstruction, women are often absent when peace agreements are signed. Only 6% of signatories in peace processes were women.

We are literally staling the chances of sustained peace by excluding women from decision-making and peace processes. Evidence has shown, time and again, that women’s participation in peace processes is a pillar for peace consolidation and conflict prevention. Conflicts, in their consequences, have a gendered dimension which amplifies existing inequalities and reinforce patriarchal and unequal power structures that disadvantage women. Yet only 22% of peace agreements signed between 1995 and 2019 contain special provisions for women. Even fewer made specific reference to violence against women which, we know, is an unfortunate reality in all conflict and post conflict situations.

My delegation would like to stress that while the instrumental value of equality in peace processes stands, women’s full, equal and meaningful participation is also simply is a matter of justice: if peace is a collective issue, then why should it be discussed, consolidated, and achieved without women?

My delegation reiterates the need to respond effectively to this longstanding injustice and rights’ violation that not only handicap our work but also the effectiveness of peace processes. To this effect, we issue five key take-aways:

When there are more women in public leadership, they can fundamentally alter policies in ways that induce structural change. Our assessment of various interventions by women peacebuilders, during the past year, shows that, one of the common recommendations is the call for the meaningful engagement of women, beyond a tokenistic involvement or consultation at specific stages.

During conflict and post conflict stages, when agreements are negotiated, signed, and monitored, women need to be meaningfully engaged as actors that influence political processes and reforms, economic development, and various aspects of transitional justice and reconstruction.

The ECOWAS Conflict Prevention Framework (CPCC) has a specific component “woman, peace and security” in accordance with the provisions of 1325. It calls on Member States to adopt a National Action Plan (NAP) to implement the said resolution. In 2015, Niger used this framework to develop its 1325 National Action.

Access to education for girls in conflict affected areas is critical and is a priority of our mandate at the Security council. The PRST adopted under Niger’s presidency, last September, highlights the gendered drivers and incidence of attacks against schools. We commit to furthering the fundamental rights of girls and young women for access to education– as a pillar of conflict prevention but also as a means to ensure women take their rightful space in decision-making and leadership. Nobel Peace laureate, Wangari Maathai, has rightfully said, “You cannot enslave a mind that knows itself. That values itself. That understands itself.”

I end by stating that the idea of women’s leadership and participation, which is a priority for Niger, is deeply rooted in our region’s long and more recent history where women like Sarraounia Mangou, Queen Amina of Zazzau, and Nana Asmau Fodio have shaped the social and political spaces in ways that cemented women’s leadership as a norm rather than an anomaly.  In a more recent history, the implementation of the gender policy (2017) and the quota law (2000) have provided the government a significant opportunity to appoint women in critical decision-making positions which positively impact the implementation of peace and security programs in our country that is negatively affected by regional  wars and humanitarian crisis. In the current government which was formed in 2016 for five (5) years, women held very critical cabinet positions as Minister of planning, Minister of Social Development, Minister of Labor, and Minister of Women’s Affairs. As Heads of cabinets, these female leaders have placed gender equity at the center of their respective mission with great success. This March 2021, 28% of the elected parliamentarians are women while the quota law a significant progress that allows these parliamentarian women an opportunity to create a specific commission in Parliament that monitors the implementation of the 1325 National Action Plan.   This is a very positive trend for our country.

I thank you for your attention.