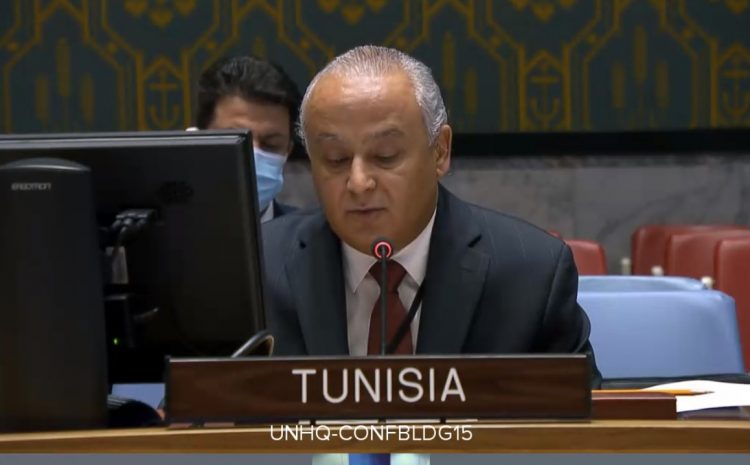 I have the honor to deliver this statement on behalf of the A3+1 members of the Council, namely Kenya, Niger, Tunisia and Saint Vincent and the Grenadines.

We welcome the participation of H.E João Lourenço, President of the Republic of Angola and Acting Chair of the International Conference on the Great Lakes Region (ICGLR) and join other delegations in thanking the Special Representative of the Secretary-General, Mr. Mankeur Ndiaye, for his comprehensive briefing on MINUSCA’s activities.

We commend the fundamental role played by MINUSCA in assisting the Central African authorities and people in their quest to achieve lasting peace and stability.

We thank and commend the Secretary-General for his comprehensive report.

The A3+1 statement will focus on the political, security and humanitarian situation in the CAR and the recent developments in the country and the region.

On the political front, the December 2020 presidential and legislative elections were a litmus test of both the usefulness of the 2019 Peace and Reconciliation Agreement and the progress in its implementation. These elections served as a tool to assess the contribution of all international actors to the stabilization process in the CAR.

These elections, organized with the support of international partners, made it possible to preserve constitutional order and institutional stability despite challenges and threats. The finalization of the electoral process will be effective with the holding of credible and inclusive local elections tentatively planned for the first quarter of 2022.

We value the efforts of MINUSCA and the UN Country Team (UNCT) in providing integrated electoral support for the preparation of those local elections. We equally commend the efforts of the CAR authorities and the contribution of all the stakeholders in this process and look forward to the holding of these elections in a more peaceful and secure climate.

In this respect, we welcome the vision of President Touadéra which he set out for his second term, and we are looking forward to the concretization of this promise.

We equally note with satisfaction the recent holding of national consultations as a prelude to the republican dialogue and the association of partners in this process.

We encourage political dialogue, including the political opposition, civil society, women and the youth, in order to create better conditions for the democratization and reconciliation of Central African society.

We note that some progress has been made in the implementation of the Political Agreement and we concur with President Touadéra’s conviction that this Agreement remains the only valid political framework for peace and stability.

While we commend the continued efforts to reinvigorate the Political Agreement despite ongoing armed confrontation with the CPC, we note with concern that some key provisions of the Agreement have not been implemented, a situation further complicated by the many violations of this Agreement by signatory armed groups.

We call on all the parties to abide by the provisions of this Agreement and to work effectively on their full implementation.

We remain also deeply concerned at the continued threats and attacks against the civilian population, humanitarian actors and UN peacekeepers, as well as allegations of serious violations of international humanitarian and human rights law, allegedly committed by the parties to the conflict and their allies.

We strongly denounce the disinformation campaigns, hate speech, and targeted attacks against MINUSCA and its leadership, as well as other international partners of the Central African Republic.

In this regard, the A3+1 acknowledges the public statement by President Touadéra calling for an end to these acts and the prosecution of the instigators.

The A3+1 regrets the cross-border incident that occurred on 30 of May 2021 which generated tensions between the CAR and Chad. We are encouraged by the speedy way the two parties moved to address it through dialogue.

In this regard, we welcome the joint communique by the Ministers of Foreign Affairs of both countries as a first encouraging step toward resolving this issue through the diplomatic channels.

On the security front, the A3+1 remains deeply concerned by the ongoing destabilizing activities of armed groups mainly CPC-affiliated groups which have resulted in further casualties and displacements.

We express our concern over the unprecedented reports of violations of the status of forces agreement and obstructions targeting MINUSCA. These acts are hindering MINUSCA’s ability to effectively conduct its mandate, in addition to putting its personnel at risk.

We welcome President Touadéra’s commitment to ending these acts and ensuring the prosecution of the perpetrators. We further call on the CAR authorities and their partners to abide by this Agreement.

We commend the CAR national authorities in conducting a review of the national security sector reform strategy and look forward to the implementation of the resultant recommendations.

With regard to DDR, we commend the efforts of the CAR authorities with the support of MINUSCA in advancing this important task along with the improvement of the Justice and law sector despite the negative impact of the volatile security situation on its functioning during the electoral phase.

We note the recent assessment report of the SG on the progress achieved so far by the CAR authorities on the key benchmarks related to the arms embargo with the support of MINUSCA and other regional and international partners. While we commend the efforts of the CAR authorities and the 2127 Sanctions committee aiming at further advancing the full implementation of these benchmarks, the A3+1 considers that the full and effective implementation of these benchmarks will pave the way for the lifting of the arms embargo, taking into consideration the development of the situation on the ground.

We recall in this respect the Security Council Resolution S/RES/2566 (2021), where the Council reiterated its readiness to review the arms embargo measures on the Government of the CAR, through inter alia suspension or progressive lifting of these measures, in the light of progress achieved on those key benchmarks.

We call on national authorities to strengthen their efforts in the fight against impunity, including through the Special Criminal Court, as well as the operationalization of Truth, Justice, Reconciliation and Reparation Commission.

The already volatile security situation has further exacerbated the dramatic humanitarian situation in the Central African Republic. Population displacement, surging food prices, COVID-19 socio-economic impact, and declining agricultural production caused by floods are but few alarming aspects of this dire humanitarian situation. UN data indicates that over half the population, 2.8 million people, need humanitarian assistance and protection, with 1.9 million in dire need whereas half of the country’s children are out of school.

In this regard, we call on CAR authorities and all armed actors in the country the ensure unhindered humanitarian access. We appeal to international and regional donors and partners to further provide financial support for the country’s Humanitarian Response Plan.

We join the Secretary-General in expressing deep concern by the significant increase in human rights violations and abuses, including conflict-related sexual violence, targeted abuse and stigmatization of ethnic and religious minorities, and excessive use of force committed by all perpetrators be it armed groups, national defense and security forces, and bilaterally deployed and other security personnel.

We encourage the CAR authorities to ensure the implementation of international humanitarian and human rights laws and that all violators are held accountable.

We reiterate our deep concern about the illicit trafficking, trade, exploitation and smuggling of natural resources, illegal taxation which continue to fund and supply armed groups further threatening the peace and stability in the CAR.

While reaffirming our continued solidarity and full support to the Central African people in their efforts and legitimate aspirations to lasting peace, stability, and development, we reiterate our strong belief that achieving these objectives is only possible through re-launching the peace process. There is no alternative.

To conclude, the A3+1 commends the efforts deployed by the African Union and the Economic Community of Central African States, in their capacity as guarantors of the Peace Agreement, the ICGLR and other partners in their quest for peace in the CAR.

We encourage them to enhance their good offices to contain tensions and encourage all stakeholders to engage in dialogue as the only way to bring security and stability to the Central African Republic and the entire region. In this respect we are looking forward to the outcome of the field mission to be conducted by the AUPSC to Bangui by the end of this month.