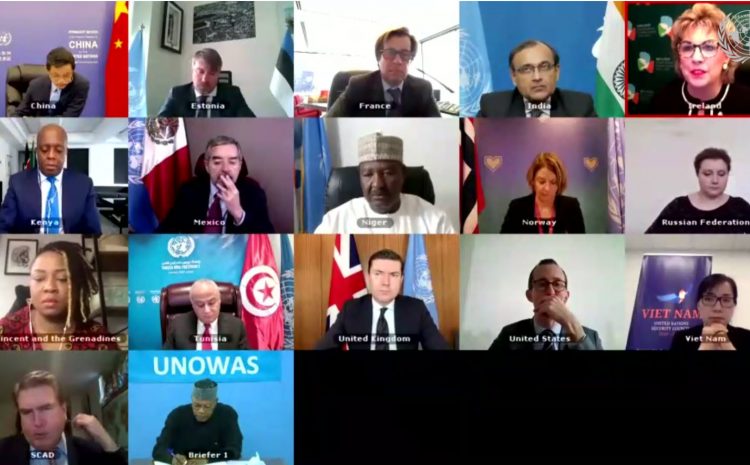 Thank you, Mr President,I have the honour to deliver this statement on behalf of the A3 +1 members of the Council namely, Kenya, Niger, and Tunisia + St Vincent and the Grenadines.

Before delivering this statement, let me begin by conveying my sincere condolences to the people and Government of Niger, through Ambassador Abarry, for the lives lost during the wanton attacks meted on innocent civilians on 2nd January in the southwestern region of Niger. This heinous act demonstrates not only the volatility, but also the transboundary nature of security threats in the region.  As we stand in solidarity with the Government and the people of Niger, our resolve should be to do whatever we can to eliminate the threat of terrorism in the region and the continent at large.

Let me join other delegations in thanking SRSG Mohamed Ibn Chambas for his briefing and for his dedication to promote dialogue through good offices, which have certainly contributed in overcoming political impasses in the subregion. In this regard, we remain convinced that preventive diplomacy should continue to be a priority task of UNOWAS. We also commend him for his leadership that has seen UNOWAS efficiently discharge its mandate against a backdrop of an increasingly challenging regional environment.

We welcome the positive developments in the region including the successful conduct of elections in Burkina Faso, Cabo Verde, Côte d’Ivoire, Ghana, Guinea, Liberia and Niger. We are encouraged by the fact that the people of these countries, aspiring and longing for peace and prosperity, have shown political maturity during these elections. The region’s achievements in democratic governance ought to be consolidated.

The continued terrorist attacks against civilians, security, and defence forces as well as peacekeepers in Burkina Faso, Mali, Niger, and Lake Chad Basin countries remains a matter of great concern. Early warning mechanism plays a key role in the concerted efforts of the region and international partners. To that effect, we call on UNOWAS to resume supporting the G5 Sahel’s Sahelian Center for Threat Analysis and Early Warning.

The A3+1 expresses grave concern about the significant impact of the COVID-19 pandemic on livelihoods and governance structures and systems including electoral and political dialogue processes; humanitarian situations; socio-economic situation; and regional and multilateral engagements and commend UNOWAS for its relentless efforts in support of the COVID-19 response in the region, as well as the coordinated regional response led by ECOWAS.

Finally, we believe that the most sustainable solution to the situation in West Africa and the Sahel lies in comprehensive strategies that address the root causes of insecurity and instability.