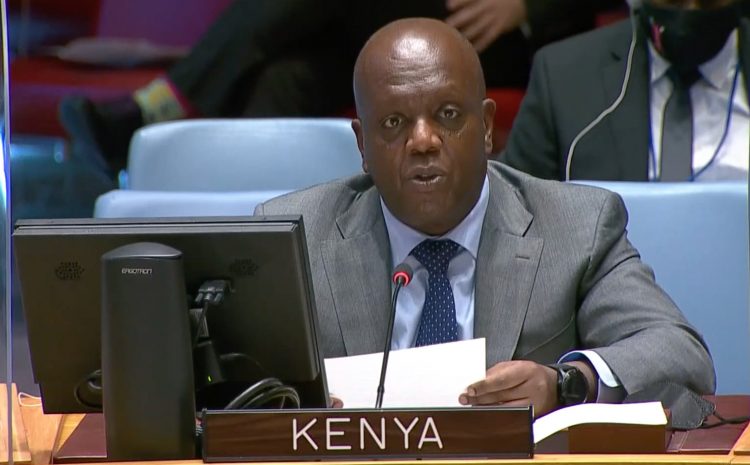 I have the honor to make this statement on behalf of the A3+1, namely Kenya, Niger, Tunisia and St. Vincent and the Grenadines.

We reaffirm our continued support to MONUSCO’s mandate and its effective response to its dynamic operating environment.

We remain concerned at the growing humanitarian needs in eastern DRC that are being worsened by the ongoing violence, the impact of the COVID-19 pandemic, and refugees who fled the Central African Republic in the wake of the December 2020 elections.

We commend the government for its prompt humanitarian response to the victims of the volcanic eruption of Mount Nyiragongo. We call on all international partners to provide necessary support to the 2021 Humanitarian Response Plan for the DRC.

The A3+1 recognizes the efforts of the government of DRC in addressing the incessant conflict, killings and grave violations taking place in the eastern parts of the country, including as mentioned in the latest SG’s report, the declaration of the state of emergency in conflict-affected eastern provinces.

We support MONUSCO’s continued collaboration with the government security agencies in combatting armed groups. We call for intensification of joint planning and tactical operations, including, through the deployment of intelligence and surveillance capabilities for the early detection of potential threats of armed group activity.

We urge the UN, financial and technical partners to support strengthening the capacities of national institutions responsible for the rule of law, security and inclusive development in order to create safe environments conducive for sustainable peace.

The A3+1 welcomes the establishment of a disarmament, demobilization, community reintegration and stabilization (DDRCS) program by the government of DRC in its program of action for 2021-2023. We further acknowledge the establishment of a Contact and Coordination Group (CCG) mandated to oversee non-military approaches towards the eradication of hostile forces in the Great Lakes region.

The A3+1 stresses the importance of Disarmament, Demobilization, Repatriation programs that offer comprehensive solutions to ex-combatants and strengthen the resilience of communities that host them. In this regard, we appreciate MONUSCO’s role in disarming and providing reintegration support to over 120 disengaged Congolese ex-combatants.

In view of the gradual exit and drawdown of MONUSCO from the Kasais and Tanganyika, it is critical to develop and execute a transition plan which entails among others, an efficient transfer of important tasks such as early warning networks to the host government.

The transitions should be complemented by peacebuilding efforts focusing on socio-economic development initiatives that promote post-conflict reconstruction to prevent potential relapse into conflict.

The A3+1 is gravely concerned by the increasing incidents of violence, including sexual and gender-based violence against women and children in eastern DRC. We strongly condemn these egregious acts and call for redoubled efforts to protect these harmless civilians and ensure that those involved are brought to justice.

The increasing indiscriminate use of Improvised Explosive Devices (IEDs) by armed groups such as the ADF to attack civilians and UN personnel is alarming. We call for stringent measures to deny such armed groups access to components for the manufacture of IEDs.

The government should continue strengthening its justice sector to defend human rights in line with its zero-tolerance policy on gender-based violence. Towards this end, we call on international partners to provide capacity building support for the relevant state institutions and agencies.

The A3 + 1 reiterate its commitment to the principle of subsidiarity as enshrined in the letter and spirit of the UN Charter. We recognize the significant role of regional organizations in particular, the Economic Community of Central African States (ECCAS), the International Conference of the Great Lakes Region (ICGLR) and the African Union (AU) in supporting mediation, dialogue and promoting sustainable peace, security and development.

In this way, the natural wealth of DRC has become a driver of conflict, violence and instability rather than development and prosperity. If the DRC is to know sustained peace, the role of natural resources must be turned around by first enhancing state presence in mineral rich areas; secondly, ensuring that the relevant agencies have the capacity to manage the entire natural resource extraction continuum; and thirdly, ploughing accrued proceeds to national development and peacebuilding programs.

As such we recognize the important role of regional cooperation in promoting the implementation of the provisions of the Addis Ababa Framework Agreement, including implementing tools such as the Lusaka declaration to fight illegal exploitation of natural resources in the Great Lakes region. We therefore welcome the recent visits to DRC Heads of State of Kenya, Rwanda and Uganda as positive steps in this direction.

We commend the efforts made by the government, with the support of MONUSCO and member states, to improve and strengthen its weapons and ammunitions management to reduce the risk of diversion of arms to armed groups. We encourage continued regional approaches such as the Regional Centre on Small Arms and Light Weapons (RECSA) to deal with this menace. As the DRC makes progress in these areas, the Council should give due consideration to the request for the removal of the notification requirement for the government to acquire weapons.

In conclusion, we reiterate our steadfast support for MONUSCO in its efforts to provide security for the civilian population and support the strengthening of key state institutions in the DRC. We stand in solidarity with the Government and the people of the Democratic Republic of the Congo in their quest for sustainable peace and socio-economic prosperity.